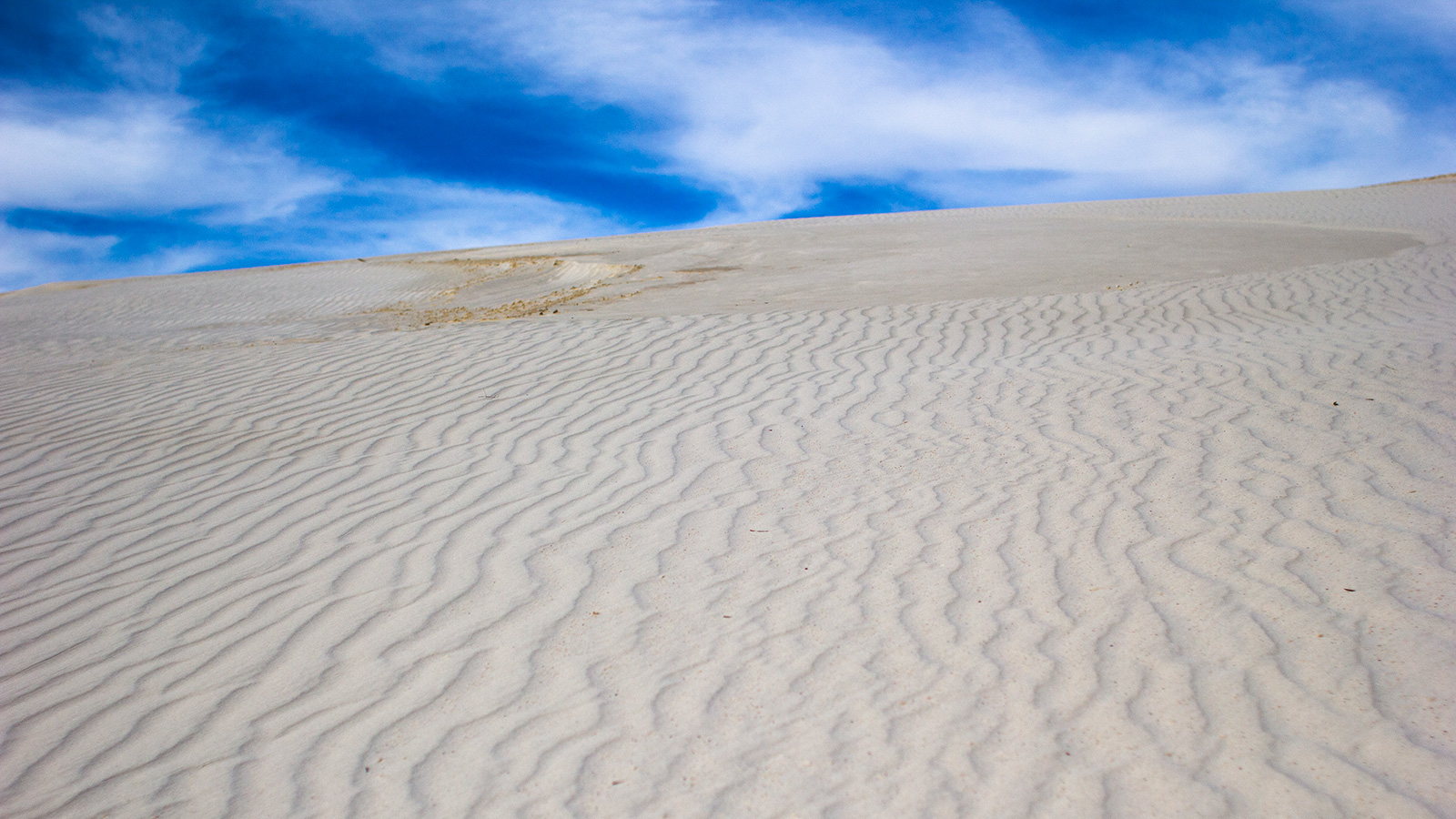 A man and a woman, gray-haired, maybe in their sixties, walked across the road carrying a folded cardboard box. They had big smiles on their faces, almost to the point of giggling. What were they so happy about? They looked like teenagers who had just lifted something out of a convenience store. I later learned that these two had gotten it into their heads to jury rig a sled from said box and ride it down the dunes of White Sands National Monument, laughing all the way.

Past the happy couple and their mischief, my wife, dog, and I continued in our Subaru farther into the park. Minutes ago, we had secured permits for backcountry camping and were headed to the trailhead for the campsites. The road turned from asphalt to sand, brought us deeper into the dunes of sand, and led us to our parking lot, also constructed of sand. 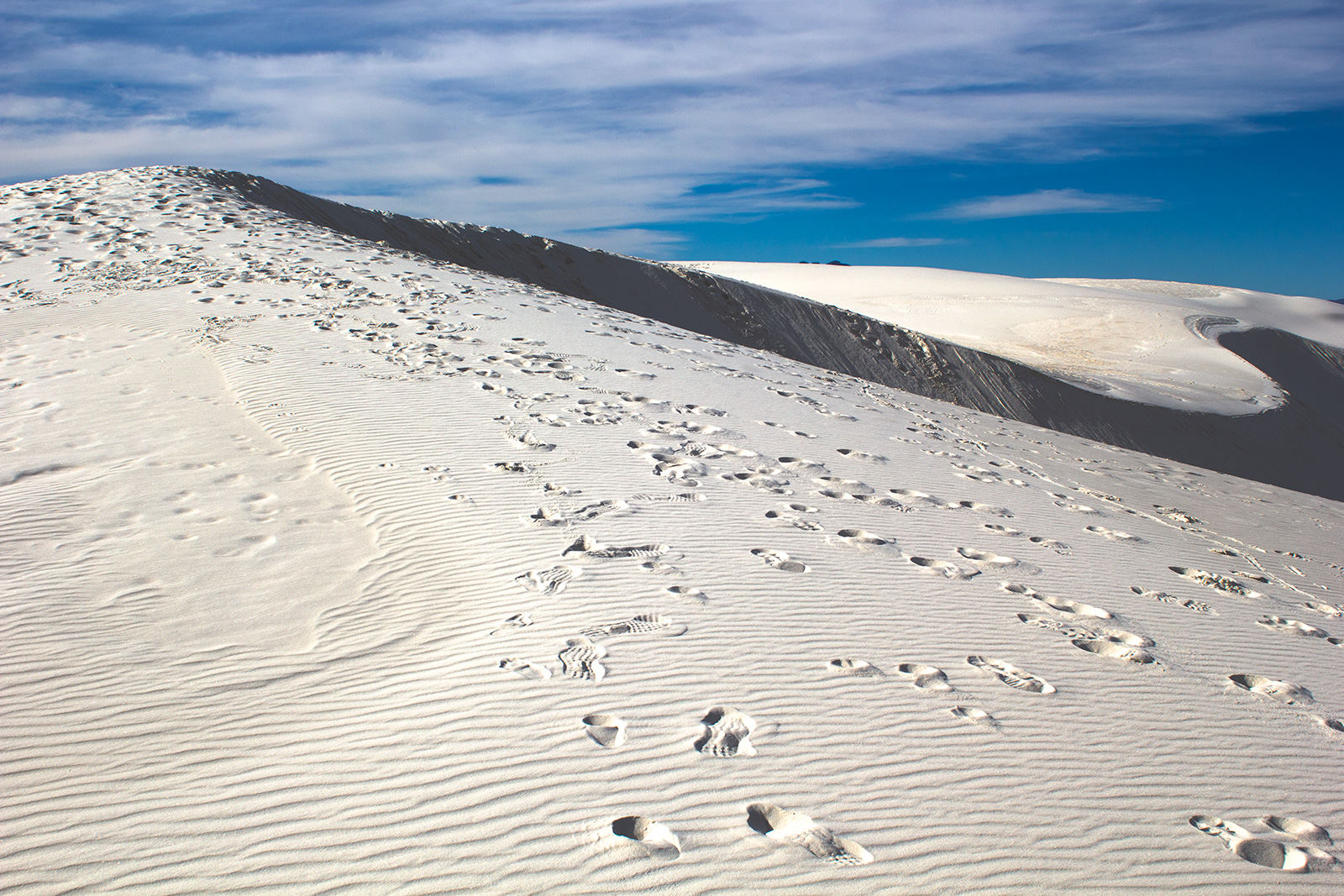 Our dog Galley, already excited by the prospect of camping with us, went bonkers at the sight of her favorite thing: snow! Except it wasn't snow. It was another cold, white thing that covered the ground, with the difference being that white sand is a lot less fun to eat. Life can be confusing sometimes. Galley would continue to test the sand for snow-ness over the next several days, just to be sure.

The trail to the campsites was marked by posts in the sand, relatively constant amongst the ever-changing dunes. We followed these along the dune crests, half way around this loop trail, and arrived at our designated campsite. The sites were fairly isolated from each other by the dunes, with each little dune valley having two campsites spaced generously apart. From our vantage, we were out of view of the other campers, giving the lovely illusion of having the desert to ourselves. We set up camp in our little patch of expansiveness, then did some exploring in the undulating white. As is my wont, I rolled down a sand dune or two. Galley did her dog thing of plowing downslope with paws out. 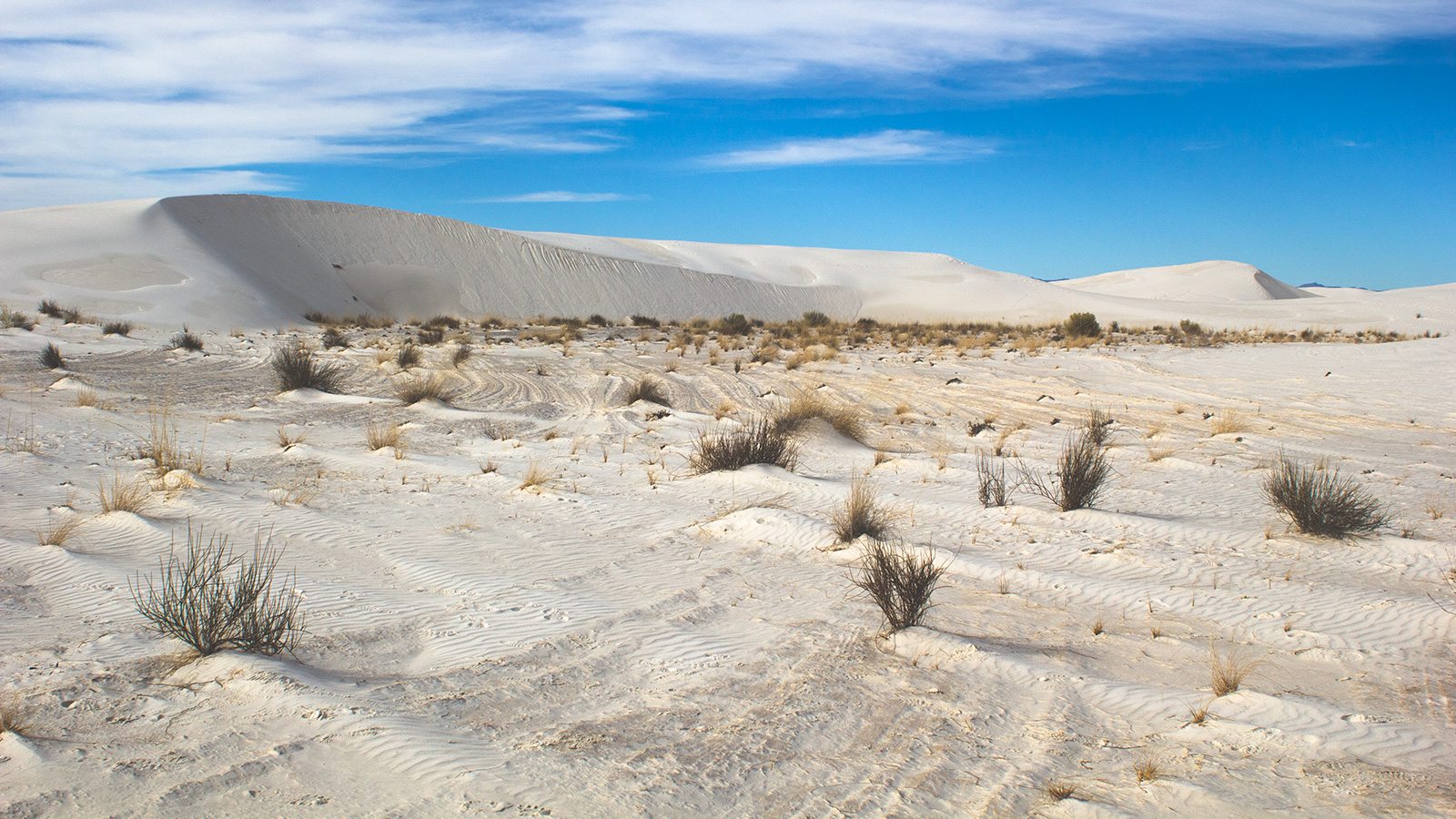 The view from our campsite

It's uncanny how advertising has, in my head, created associations with the image of white sand. I half-expected a luxury SUV to drive over the dunes or to meet a model in a sheer dress offering me a beer. Magazines aside, the changing white dunes had a calming effect. They subtly suggest that, in time, everything will be erased. In the distance, the San Andres Mountains offered a sense of scale to the desert floor.

After a dinner of tuna and rice for both dog and humans, we bundled up for the desert night and went to bed.

Backcountry camping in White Sands is limited to ten designated campsites along a 2.2 mile loop near the end of Dunes Drive. Pay for a permit at the visitor center before 5:00 PM to be assigned a specific campsite. These cannot be reserved, but are first-come first-served only, so arriving early for a permit is a good idea if that's your plan.

Dogs are allowed, on-leash, both in the campsite and on the dunes.

Saucer sleds are available for purchase or rent at the visitor center, or like the scrappy couple mentioned earlier, bring a cardboard box and make your own.

If you land a backcountry permit, treat yourself to dark-sky stargazing at night, or an ethereal landscape under a full moon, but take care not to get lost. The dunes can be disorientating and the wind can erase footprints. Get comfortable with a compass and/or GPS before venturing out of view of your tent. 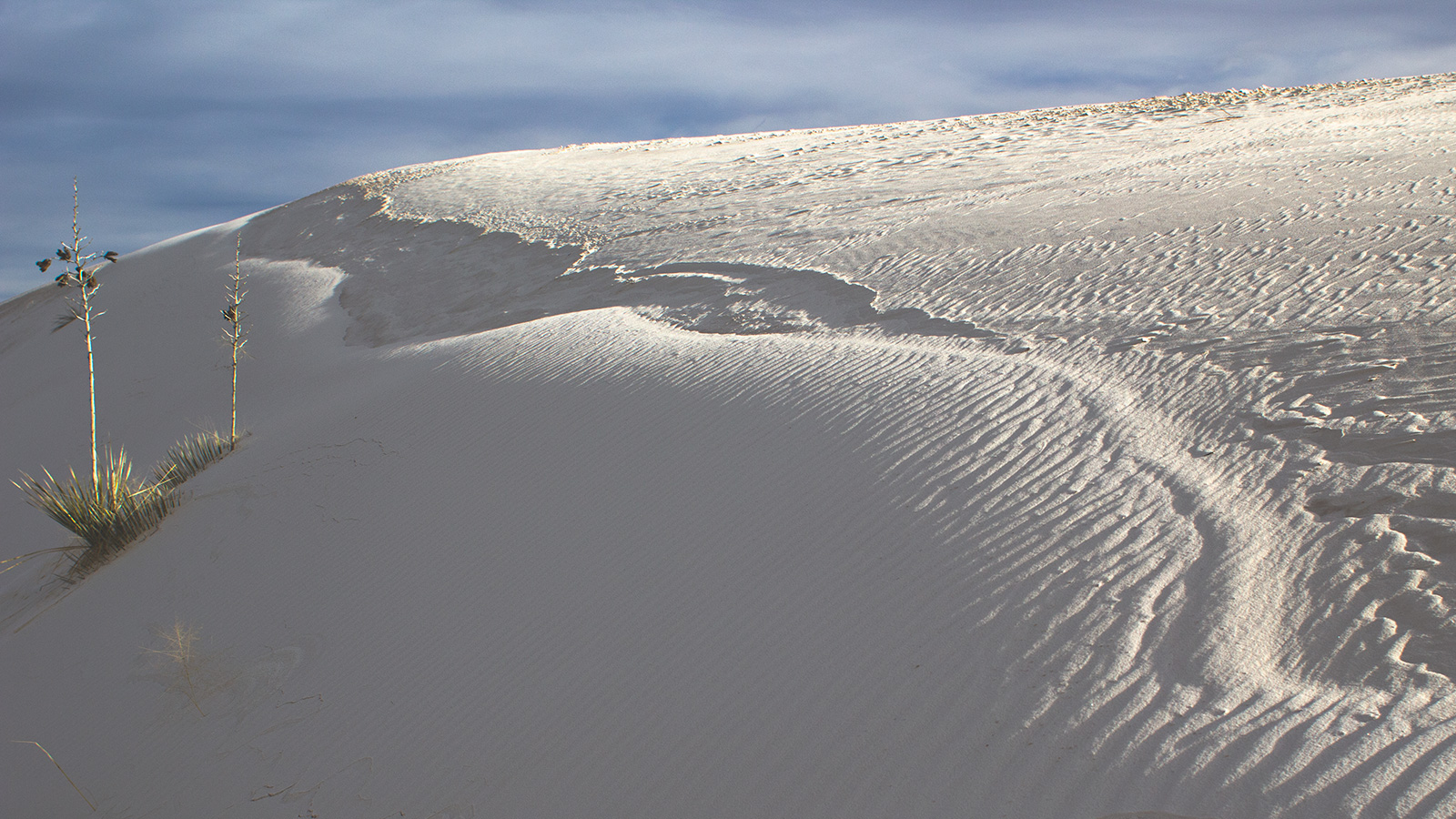 Other notable dangers include unexploded ordnance from the neighboring missile range. "From time to time, debris from missile tests falls into the monument and is buried by sand. If you see any strange objects, do not touch them as they may still be able to detonate." Campsites are not reservable ahead of time because the park and adjacent highway are subject to closure on short notice for missile tests. This means that, unfortunately, you can't be sure the park will be open the day you arrive and just have to take your chances. Have a backup plan.

Indeed, the beauty of the landscape belies the history of the area. On July 16, 1945, sixty miles north of the monument, the world's first thermonuclear detonation occurred at the Trinity Test Site. It generated a shockwave felt 100 miles away, melted the desert floor, and the site remains radioactive to this day. Still, for better or worse, when standing in that sand, it's evident that our time in the desert is just a blip in the geological timeline.

We took this trip December of 2016