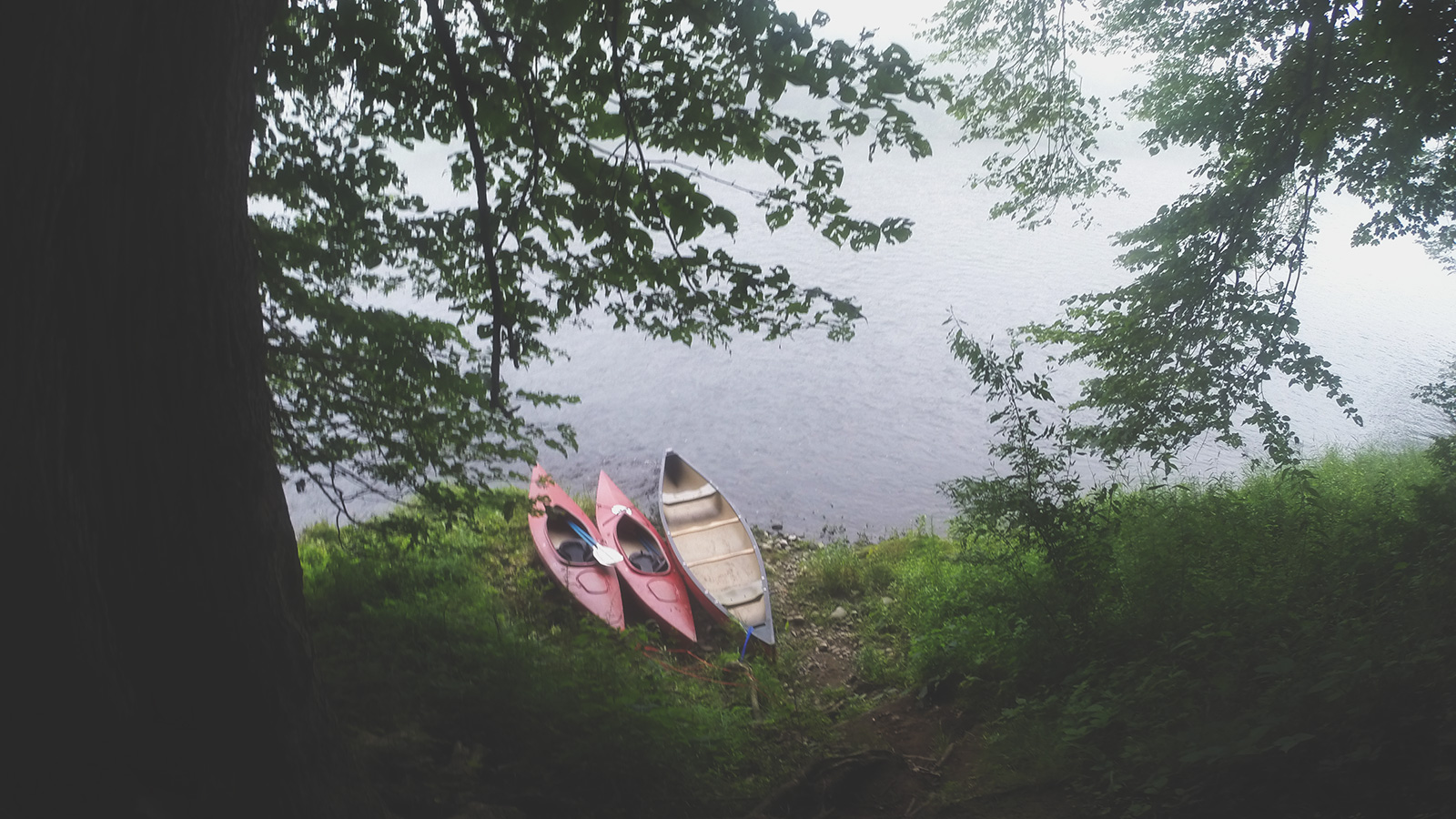 Like most people under the age of ten, I jump on any excuse to use the word "starboard", so when I was asked to go canoe-camping, it seemed like a very good idea. For this, Joanna and I met two friends at the very top of New Jersey, in the town of Matamoras on the shore of the Delaware River. Our plan was to put in at Matamoras, paddle fifteen miles down to Dingmans Ferry, and camp on one of the river islands along the way; a leisurely two-day, one-night paddle.

The Delaware itself begins in southern New York, in the Catskill Mountains, as two branches that flow and meet in Hancock, Pennsylvania. From there it continues south, forms the entire Pennsylvania - New Jersey border, widens into the Delaware Bay, and finally empties into the Atlantic. The large river is responsible for the growth of border cities like Philadelphia, Trenton, and Camden, as it provides easy access to the ocean. But where we were, north of the Falls of Delaware, the river is non-tidal and calm, perfect for a relaxing paddling trip. 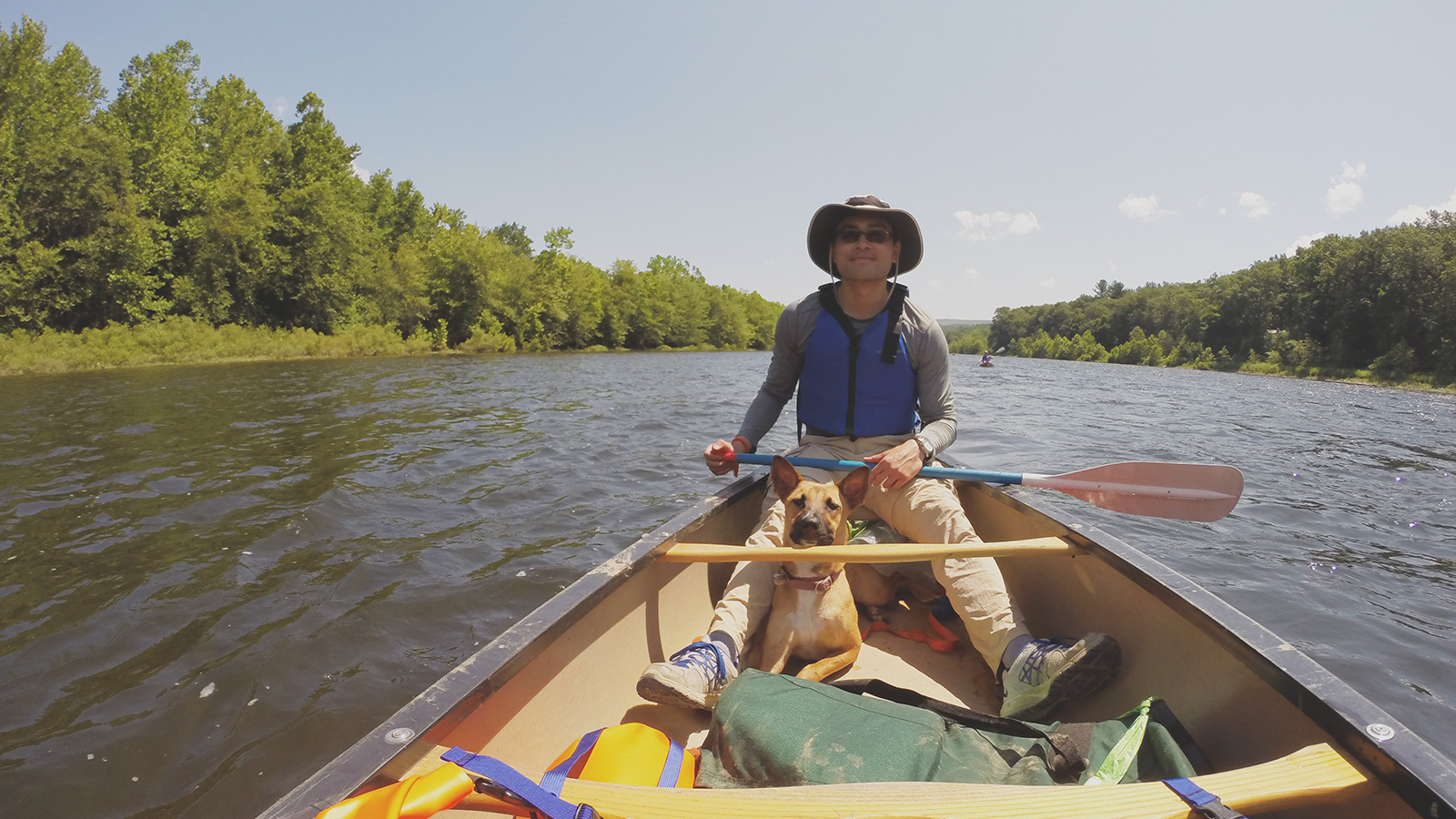 Galleon and me. I'm the one with the paddle.

Canoe-camping (or paddle-camping in general) is like backpacking except that with canoe-camping, you can bring a lot more gear and relax on your butt and, well, you're in a canoe in one case while you're not in the other. Certain luxuries, like beer or fresh fruit, become practical when paddling. For gear, the only things we brought beyond our usual backpacking kit were items to help us out in case the canoe capsized. This included two dry bags (Sea to Summit, 35 L) for our clothes and extra webbing straps to secure everything to the boat.

The canoe itself we rented from a livery service, Kittatinny Canoes. They made things easy by helping us plan our trip and driving us up to the launch spot the morning of our trip, allowing us to leave our car at the finish. They also provided life jackets and emergency whistles along with the boat rental.

With gear and paddlers onboard, we shoved off and started paddling. There was a distance requirement of 7 miles per day minimum to be allowed use of the campsites, but the current flowed maybe 2 mph in addition to the 3 mph we could make with the canoe, so there was no hurry to move along. A lot of the time we just sat there and let the current carry us, only paddling to stay in the middle of the river, watching the shores slip by. Sometimes we would have a snack, other times we'd lay down and watch the clouds. Our dog Galley tried her best to find shade in the boat under our seats. 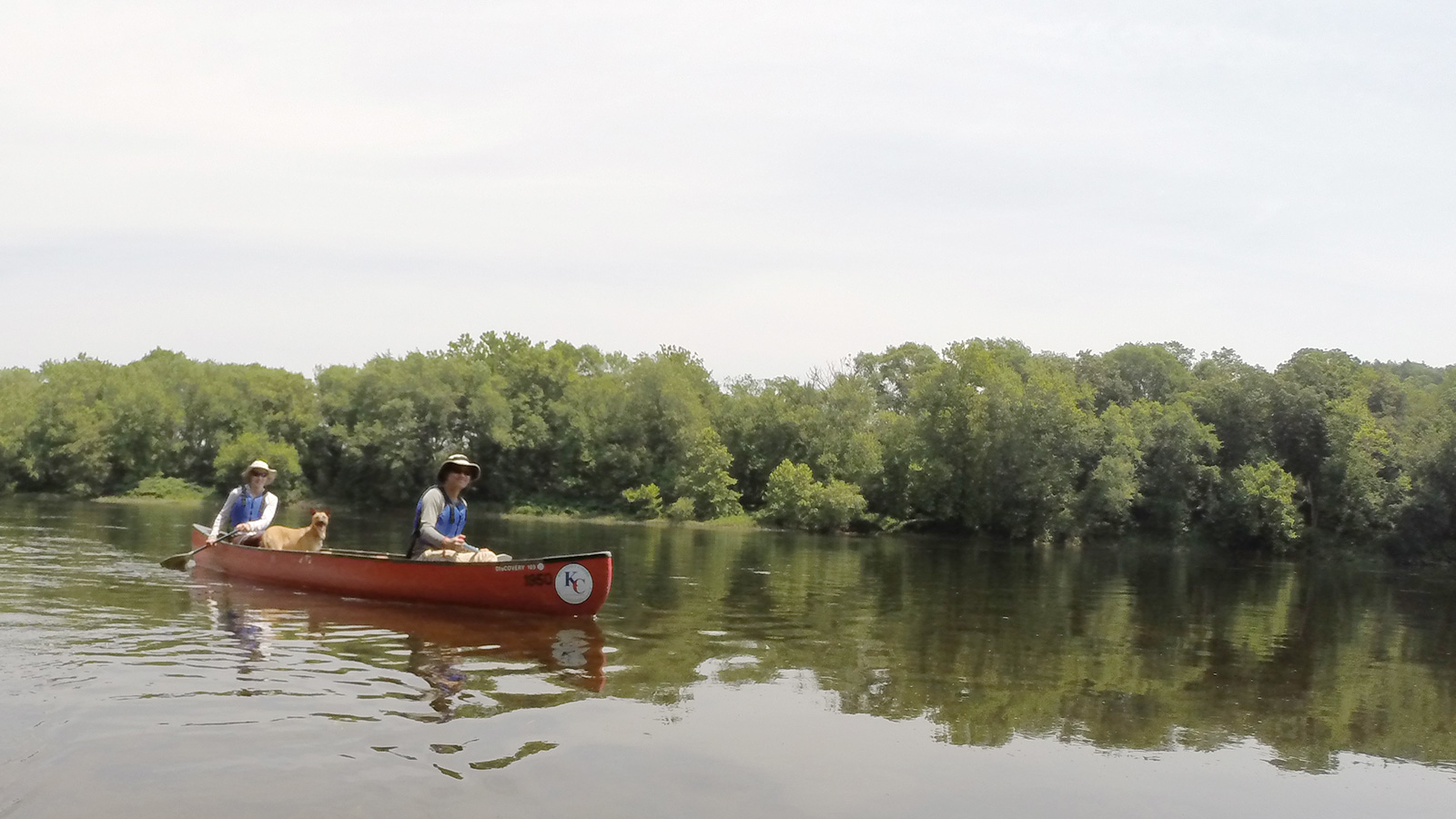 There were two islands with campsites on the river: Mashipacong and Namanock island; each a small hill of land that the river had branched around and surrounded. We planned on spending the night on Namanock, roughly half the distance between Matamoras and Dingmans. However, the islands were not labeled and their shores were overgrown in July, obscuring any obvious landing spots. A GPS would've been helpful. We paddled by Namanock Island without realizing it until we were past it.

What's more, we didn't understand the strength of the river current until we tried backtracking in search of a landing. The river flows at maybe 2 mph on a calm day, but the area had had a heavy rain the night before, so we were working against something closer to 4 or 5 mph, just about the maximum speed Joanna and I could make in a canoe. The friendly current that had let us travel the morning partly napping was now pushing us away from our home for the night.

With great effort, we fought the current, circumnavigated the island, and found a decent landing spot for our little flotilla. We tied the boats to some convenient tree roots then got out to explore the island. The dense trees provided welcome shade from the summer sun, especially after the unexpected paddle workout. The campsite was well-worn, though the five us were the only people on the island that day. We set up camp, took our time making dinner, and went to sleep to the sound of flowing water. 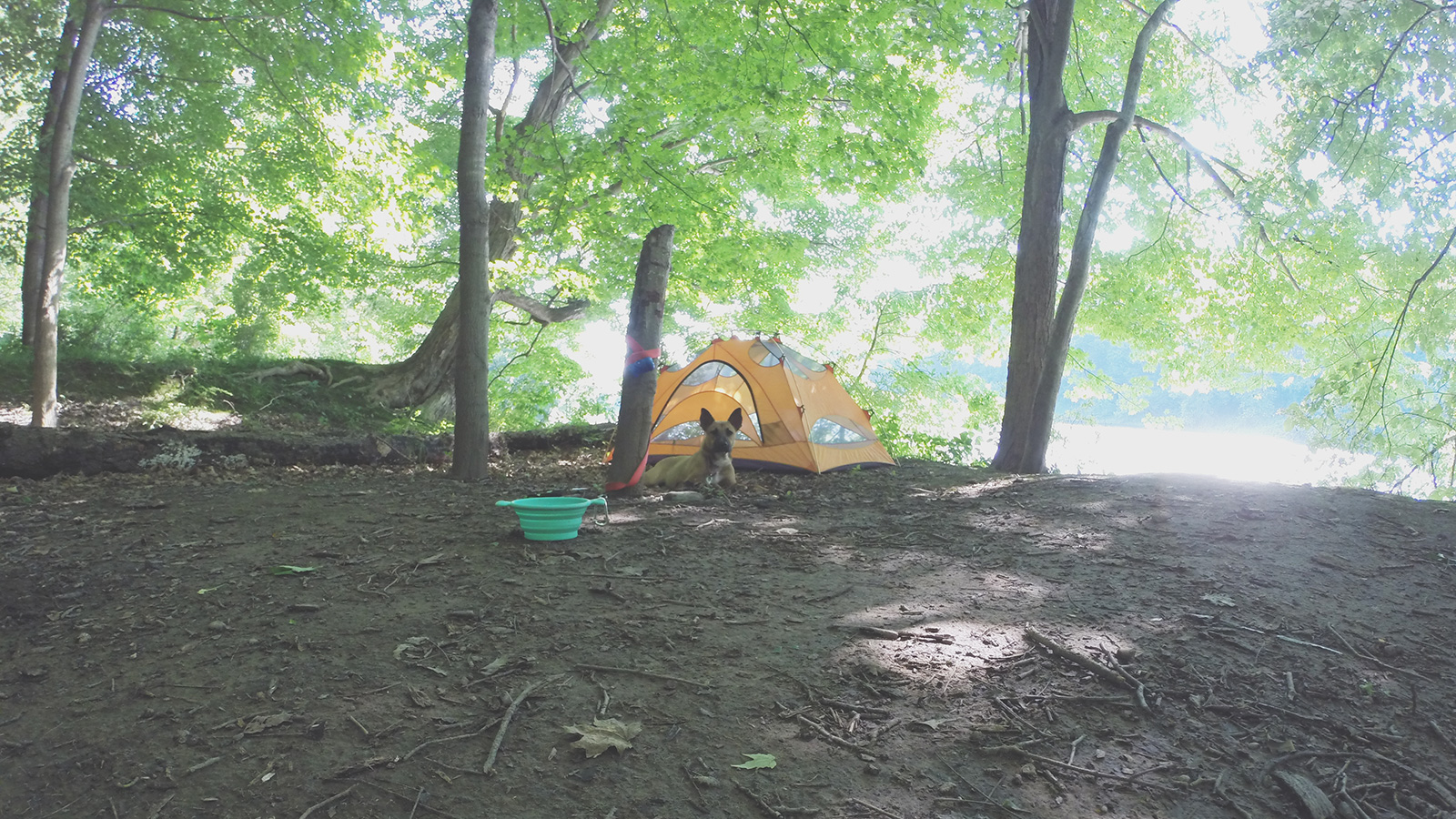 We awoke the next morning to find the river shrouded in fog, too thick to cast off in for fear of missing our destination. So we had a leisurely breakfast and waited for the fog to burn off, which it soon did.

The second day's paddle was uneventful and faster than the first since the campsite was actually further than halfway. As planned, we disembarked at Dingmans Ferry, returned the boats, and found our car where we left it. In retrospect, given the river current, we could have easily taken on more mileage and seen more of the river. I'd love to go back to do a multi-night trip, since carrying gear is so effortless.